The summer holidays can be the perfect time for many readers to commit to a reading challenge as we often have more opportunity to read. This may be on a long car journey, as we relax by the pool or shelter in the tent as we pass the time during a rain shower! I thought I would share a couple of challenges with you as it is so important to keep up the reading habit during the summer weeks. I have also included some recommended reads for our students making the move from Teen Fiction.

The Summer Reading Challenge will take place this year, via public libraries and online. Please check the opening arrangements with your local library before you visit. The Challenge is organised by the Reading Agency and this year they have teamed up with the World Wide Fund for Nature. The natural world and the environment will be championed as part of the Challenge. In previous years, I know that some of our Year 7 and Year 8 students have enjoyed participating in the Challenge with younger siblings and enjoyed shared reading together. More information about the Challenge can be found by clicking on the link to the official website below:

Recently I came across the School Library Association bingo reading challenge as this gave me the idea to create my own for Hazelwick students and their family members to try during the summer holidays. The idea behind the bingo card format is that it is less daunting to a reluctant reader than a long reading list and a bit of family competition can be a great way to encourage wider reading! I have included my template with the reading challenges I will be setting my family but please feel free to edit it. Rewards, as opposed to prizes, seem to be effective with my goddaughters and the rewards will include the control of the TV remote for an hour, selecting the film to watch on movie night and not having to empty the dishwasher! I am sure you can be more creative with your own rewards. I hope you enjoy playing! 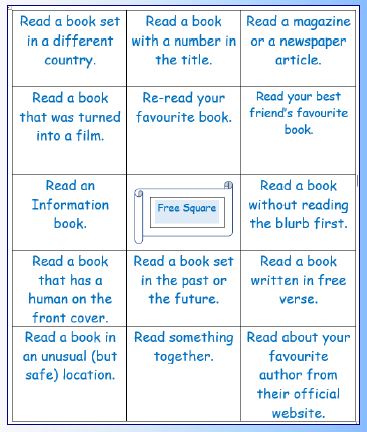 Award small rewards/prizes for the player who completes:

During the holidays, many students will be taking their first steps in ‘moving on’ from the Junior/Teen Fiction section of the library into books for older teens and Adult Fiction titles. I thought I would share some of my recommendations as I know some parents/carers express concerns about the content of books aimed at older teenagers. This list could also form a reading challenge, how many can you read by the end of the holidays, the October half term or by Christmas?

Some students (and some adults) are reluctant to dip their toes into reading classic fiction so I usually start with the shorter novels to build reading confidence. Focusing upon the genre/themes seems to be effective in helping students decide which classics to try. I believe that books become classics because they have themes that continue to resonate with modern readers. This is my list of recommended titles:

If you would like some further classic reads, please check out the recommendations from Penguin book readers that made the Penguin top one hundred classics list:

To see this article in full, with accompanying imagery,  see pages 20 - 24 of  the July edition of the Headteacher's Newsletter.