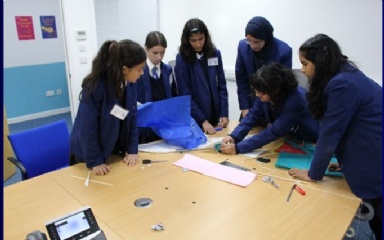 This Autumn Term we have had 2 great successes in our STEM activities. Firstly, Year 9 and Year 10 students took part in an international bridge building workshop with schools from the UK, and the USA.

The afternoon was started off by Mr David White, the Apprentice Lead at Gatwick Airport where he is in charge of training for the young people at Gatwick who have secured roles; and trains them over four years to be their future engineers.

Following on from this, the students were given a presentation in which they were asked to consider the importance of bridges, including ideas about the use of simple bridges transforming people’s lives throughout the developing world.

The presentation also considered aspects of engineering relating to the different types of bridge, materials used in construction, the science behind the choice of materials and design considerations. After this, students were given time to design, build, test and improve bridges of their own.

Following on from the construction and testing session there was a discussion opportunity with apprentice engineers from Gatwick. There was also an opportunity to demonstrate the capabilities of the bridge to hold a load. All Hazelwick’s bridges performed well, holding several kilograms of masses.

Later in the term a group of girls from Year 8 and 9 attended a Girls in Engineering Day at Boeing Gatwick.

The day was split up into series of talks from women in engineering roles and challenges to test teamwork, creativity and problem-solving skills. The challenges were competitive and against the other schools present and prizes were on offer for two of the activities.

First up in the competition for Hazelwick was the Glider Challenge.  In this challenge the students had to build a glider to meet specific criteria and test it for flight distance. Following modifications, the students then had to fly their glider as far as possible. Students were aided by the Royal Aeronautical Association in this task.

Before the second challenge, female employees were able to give the girls an insight into their careers with Boeing. The shortage and importance of female engineers working on important projects such as the space capsule for Artemis flights to general maintenance of planes was highlighted. So were some of the specific challenges met by female engineers in the workplace.

After lunch the girls had to design and make a ‘Lunar Lander’ that could fall from the greatest height and would not lose its load. For this they were given limited materials and had to consider the effect of different forces on falling objects.

The final challenge of the day was to make a wing that provided the most lift. In addition to the lift for itself, the wing had to be able to provide increased lift when external forces were applied.

To close the day a number of prizes were given for the various challenges. The group from Hazelwick came second overall in the challenges and secured victory in the glider flight challenge, winning a day’s drone piloting experience. Many congratulations to them all.