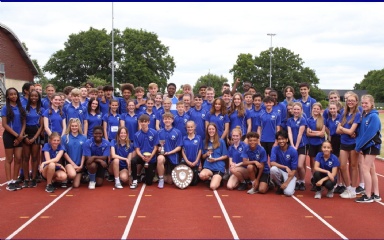 After a two year wait, we have finally been able to have a full school athletics season which has always traditionally finished with the ‘Town Sports’ competition at K2. Hazelwick have been competition winners for 10 years on the run, but we were a little nervous about this year’s competition. So many of our students had never participated in an event like this before with heats and finals in many track events. After many hours spent over the selection of teams we set off on Tuesday 5th July to K2 with the aim of retaining the shield and as many age group categories as possible.

The students represented the school so well and put absolutely everything into each event, sometimes coming away a little battle scarred. There were many notable performances from both juniors (including some Year 7’s) and intermediates. After some excellent relay performances to finish the day off it was time for the final results and award ceremony. 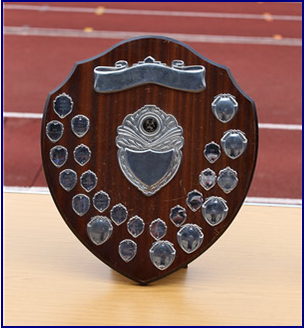 As I am sure you will know, Hazelwick retained the Town Sports shield winning 3 of the 4 age categories (Junior boys, Inter Girls, Inter Boys). Such a fantastic day was topped off with the traditional photograph (courtesy of Barry Holder).

Many of the participants worked hard at the school Athletics club throughout the summer competing at the friendly competitions and Track and Field cup. Our most able performers also join Crawley Athletics Club which is a brilliant club for them to get involved in. This years win demonstrates the rewards that can be achieved with hard work; effort achieves, as we say!

Well done to everyone involved in the day.

Finally, there are a few individuals to mention.  Avive Silner from Year 7 equalled the school Year 7 high jump record of 1.30.  All of the Year 10 athletes (pictured below) who have missed so much athletics over the last couple of years but have been such a fantastic group to have representing the school. Thank you! Hopefully some of you will compete for the school as seniors.

Well done to both.